Signing in the Snow!

To be sung to the tune of "Singin' in the Rain!"

Despite snowing during three of the four signing events I just shared with Shannon Baker and Carol Berg, we had such fun! Thanks to everyone who braved the terrible roads and weather to celebrate with us. And if you're humming Singin' in the Rain all day, well, I take full responsibility!
Posted by Janet Fogg at 9:56 AM 1 comment:

Fantasy, thriller, and time-travel romance do have much in common, including three friends who create thrilling adventures, are members of Rocky Mountain Fiction Writers and Pikes Peak Writers, and hope to see you at our shared Colorado events!

Carol Berg is a former software engineer whose hobby of writing fantasy novels has taken her in directions she never expected. Since her first novel Transformation was published in 2000, she has garnered international acclaim for her intelligent stories, complex characters, and lyrical prose. In 2009 her Breath and Bone won the Mythopoeic Fantasy Award for Adult Literature as well as the 2009 Colorado Book Award. Her new book, The Spirit Lens, is a tale of mystery, magic, and murder, and is available in trade paperback, the first of a new three-book series from NAL/Roc Books.

Shannon Baker has a right brain/left brain conflict. While the left brain focuses on her career as an accountant for The Grand Canyon Trust, her right brain concocts thrillers, including her 2010 release, Ashes of the Red Heifer. Earning several contest awards, Ashes of the Red Heifer reveals an ancient prophecy, a terrible secret, and a deadly conspiracy. Shannon’s writing can be found in a number of anthologies, including Leaning into the Wind and Crazy Woman Creek. Her new book will be released by L&L Dreamspell in trade paperback and eformats.

Janet Fogg’s focus on novel-length fiction began while CFO for OZ Architecture, one of the largest architectural firms in Colorado, and in 2008 writing became her full-time vocation. Soliloquy, released by The Wild Rose Press, is a tale of passion; of heroes, hope and the consequences of creating extraordinary music amidst the dark nights of World War II. Janet has received over 15 writing awards including 1st Place awards for Soliloquy from RMFW’s Colorado Gold, Pikes Peak Writers, Authorlink!, and Southwest Writers. Janet is Published Author Liaison for Rocky Mountain Fiction Writers.
Posted by Janet Fogg at 5:05 PM No comments:

Ashes of the Red Heifer

From my friend and fabulous author, Shannon Baker... 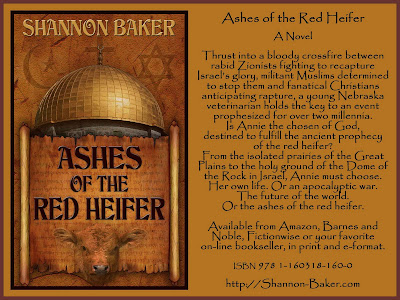 Posted by Janet Fogg at 6:30 AM No comments: