5 Star Review for Misfortune Annie and the Locomotive Reaper! 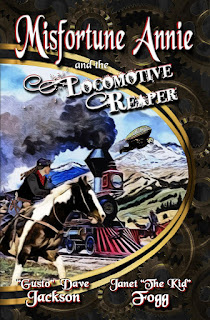 "Loved it. Felt like a kid watching a Saturday morning western. Annie, Annie, Annie, what other "misfortunes" are headed your way? Waiting for the next adventure!" ~ 5 Star Review on Amazon

Thank you for taking the time to write a review!  They're invaluable to writers!
Posted by Janet Fogg at 8:51 AM No comments:

BookBub ad: A Serenade to Die For

Though I've only recently joined BookBub, I thoroughly enjoy their site, its ease of use, and their recommendations.  Thought I would try an ad with them, which started today, for A Serenade to Die For.  It'll be fun and interesting to review the stats at the end of the week.  Fingers are crossed! 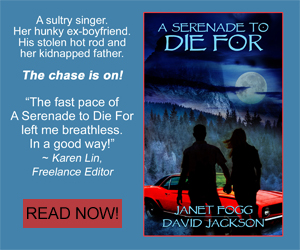 Such is the Power of Books

I adore this quote from Connis Willis, and I equally adore Dorothy Sayers' Peter Wimsey series.

“I was on a walking tour of colleges once with a group of bored and unimpressable tourists. They yawned at Balliol's quad, T.E. Lawrence's and Churchill's portraits, and the blackboard Einstein wrote his E=mc2 on. Then the tour guide said, 'And this is the , where Lord Peter proposed (in Latin) to Harriet,' and everyone suddenly came to life and began snapping pictures. Such is the power of books.”  ― Connie Willis, winner of both the Nebula Award and the Hugo Award for best SF novel.

Character development is critical for me as a reader.  If I don't like your character in the first chapter, I'm going to stop reading!  Make me care!

Posted by Janet Fogg at 9:00 AM No comments:

A Serenade to Die For - Gripping and Fast Paced Thriller

"A Serenade to Die For starts out with a bang and continues from there. The story sucks you in and doesn't let go. There are so many twists and turns, alliances and betrayals you don't know who to trust." ~ Christi Love4Books.me Amazon review

I recently spent the day fighting a computer virus on one of our computers, and remained fairly calm most of the morning, but by afternoon, when I realized this virus would likely defeat my somewhat limited abilities, I became quite angry. First, I was heated over the time I lost, but then, I became enraged for the lost potential of whoever engineered this particular worm.

As a thunderstorm grumbled through, I fear my (somewhat colorful) language provided a poignant counter-tempo to the growling overhead. Then, after a particularly virulent crash from on high, I laughed.

The jerk-savant who created the malware or virus, whatever the heck it was, wanted my rage. Well, I hate to break it to you sweetheart, but if you happen to read this, my anger was short lived. Instead, as the growling storm swept past our home and a rainbow crested over the eastern plains, I found myself pitying you. Someday, when you look back on your life, and your child gazes at you with adoring eyes, what story will you relate? How can you ever explain this part of your life? Worse yet, what happens much later, when the end of your life is near?

Let me explain a few things. First of all, you are not Neo, saving mankind from evil. I know that’s hard to accept, but trust me, you’re not a hero, and soon I hope you realize how you can fruitfully spend your time, efforts, and your undoubted brilliance. There’s so much to be accomplished in this world, and instead you choose to lurk in the sewer. I hope the stench soon drives you out and you find not only a new life, but some way to make amends, to ask forgiveness. I realize that is optimistic, but you see, writers have to be optimistic. We work in an incredibly tough profession, where rejection is the norm.

Ah, but those hours I lost playing your game, that does hurt. I’d planned on editing a manuscript, and instead, accomplished nothing. But here is my gift to you, along with this blog. I give you those hours I lost, to claim as your own. That way, since I give them to you freely, you cannot take any pleasure in thinking that you took them from me.

I’ve already delivered the computer to a geek to have your thumbprint removed. Poof! It shall be gone. Now, I’ll edit and spend time outside, enjoying the kiss of fall weather and high skies. I’ll consider my next chapter and that brings me great joy. Oh, and I might spend another moment or two pitying you. But I should caution you about that pity. You see, over the decades speculative fiction writers have predicted the future with an amazing rate of success, and I don’t foresee joy in your future, or any true satisfaction. Alas for you.