"Clouds", a poem by Philip Levine. Photo by Richard Fogg. 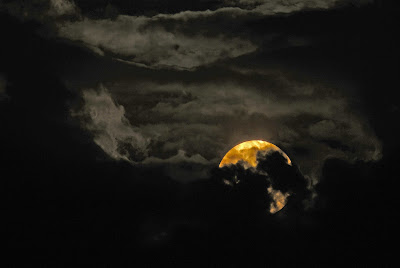 Dawn. First light tearing at the rough tongues of the zinnias, at the leaves of the just born. Today it will rain. On the road black cars are abandoned, but the clouds ride above, their wisdom intact. They are predictions. They never matter. The jet fighters lift above the flat roofs, black arrowheads trailing their future.

When the night comes small fires go out.
Blood runs to the heart and finds it locked. Morning is exhaustion, tranquilizers, gasoline, the screaming of frozen bearings, the failures ofwill, the TV talking to itself The clouds go on eating oil, cigars, housewives, sighing letters, the breath of lies. In their great silent pockets they carry off all our dead.

The clouds collect until there's no sky. A boat slips its moorings and drifts toward the open sea, turning and turning. The moon bends to the canal and bathes her torn lips, and the earth goes on giving off her angers and sighs and who knows or cares except these breathing the first rains, the last rivers running over iron.

You cut an apple in two pieces and ate them both. In the rain the door knocked and you dreamed it. On bad roads the poor walked under cardboard boxes. The houses are angry because they're watched. A soldier wants to talk with God but his mouth fills with lost tags. The clouds have seen it all, in the dark they pass over the graves of the forgotten and they don't cry or whisper. They should be punished every morning, they should be bitten and boiled like spoons.
~ Philip Levine