Tales of the 359th Fighter Group

It feels as if "The End" is finally within reach, when I print an entire manuscript draft!

This is a draft of the new military history we're working on about the 359th Fighter Group.  It's been in progress for several years, as we've slowly gathered bar stories, reports, including a few on escape & evasion, letters, and stories from the 359th Association's two newsletters published over the decades.

A different tone and take on the 359th than our previous two efforts.  Watch for Tales from the 359th Fighter Group, coming in the next few months! 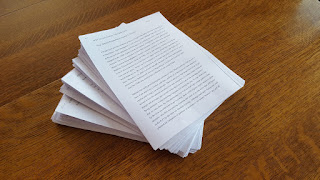