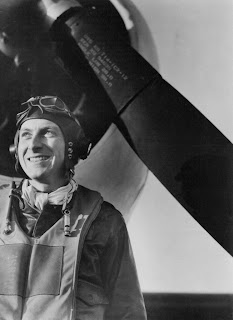 A few more of Howard Fogg’s diary entries from 1944…

February 10, 1944 – Thursday – Wretham Hall
Terrible snow squalls, 300-foot clouds. Briefing at 0815. Take off 0945. Me, Randy, Hunter, Baldy (Baldy didn’t get off, trouble with belly tank) were Yellow Flight. Whole group scattered into Flights, attempted to form above. We lost everyone. Climbed for 10,000 feet through snow and soup to 15,000 feet. Windshield iced up badly. Went on across, picked up bombers, many fours of P-47s all over, couldn’t identify ‘em, picked up Cunningham of 370th but then lost him again. Went in to Lingen, Germany. Stayed with B-17s full time, turned back singing “We Three Are All Alone.” Hit vicious squalls off and over Yarmouth, made landing field at four hundred feet. Wow. Glad to get back. Hardest flight I ever made.

May 29, 1944 – Monday – Wretham Hall
Another hot summer day. Beautiful. Up at 0700, to Plotting at 0730. Took off at 0945. Me leading Green with Hammy and a pilot I didn’t know. Late so joined Squadron in air with me as Blue Four, and Hammy as Yellow Four. The unknown pilot was Red Four. Then White two aborted, so I flew Murphy’s wing. Nice pilot. Targets Politz, Stettin, Poznan. We met bombers northeast of Hamburg near Stettin. The 368th (low flight) were bounced by 109s. We went down on twelve to fifteen 190s in front of bombers. Hit 515 IAS in formation! Murph got one in a left turn with me covering his right wing. A 190 came in on me. I broke hard up and left. Could have got around on him, but Wetmore came barreling down and got him (pilot bailed out). We joined up at 2,000 feet. No one was in sight so back to 15,000 feet. Flew home via Kiel, Heligoland. Four hours and thirty-five minutes. Whew! The 370th got eight, the 369th got two and the 368th got two. Hag got another. Wetmore and Lane each got two. But the 369th lost Brundage and Morrill.

June 6, 1944 – Tuesday – Wretham Hall – D-Day
Raining and overcast. Briefing at 0030. Worked right thru the night. First take off was at 0240. Full night. Tacon leading “A” Group. Colonel gave us the whole picture and did a fine job. Group assigned areas ringing beach heads for patrols. Chappie gave prayers on truck in moonlight. Gorgeous night. Inspiring. I’ll never forget it. Take off accomplished okay. Waited to rain until 10 minutes after take off. A miracle! They (“A” Group) were out six and one-half hours! “B” Group off at 0540 to relieve ‘em. Each Squadron left one hour apart to bomb and strafe area 770 (Le Mans – Tours). I went with the 370th. Mac led Squadron. I led Red Flight with Hastings, Connelly. Swell formation up thru holes in several cumulus decks. In at 20,000 feet then down to deck. The eight of us first bombed roads and railroad tracks, then we found a train west of Le Mans and shot the Hell out of it. No enemy aircraft, no flak, no signs of anything. Got back together, came home in perfect formation. Swell mission. Lousy cumulus over England with rain and low ceilings. Landed at 1630. No sleep, dirty. I plotted five missions unassisted. I was dead. Tacon’s “A” Group went out again at 1800 to patrol area 770. Tacon’s Group came back in full dark at 2330. Several landed elsewhere. I ate, took a hot bath, in bed at 1900 and was asleep by 1900:10!!

November 11, 2009 - In summary, as we remember our Veterans…
Captain Howard Fogg flew 76 missions and completed his combat tour in September 1944 and was discharged from the Army in August 1945. Along with the ribbons he earned while with the 359th Fighter Group, Howard was awarded the Air Medal with three clusters and the Distinguished Flying Cross with one cluster. There were 13,455 sorties flown by the pilots of the 359th. In addition to guarding the “heavies” they shot down 241 enemy aircraft, with an additional 33 probables and 69 damaged. Another 122 were destroyed on the ground plus 107 damaged. Almost 500 locomotives and 1,400 railway cars were destroyed or damaged. Other ground attacks supported troop movements and targeted infrastructure.